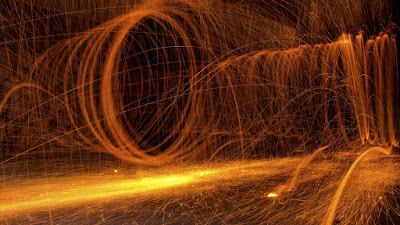 I've just finished listing to, and have been greatly impacted by the audiobook, Supernatural: The life of William Branham. The vibe I picked up from this highly-detailed biography of one of the Churches' healing pioneers, contains a similar and familiar scent, reminding me of what I've read concerning other revivals of the past. And while I've heard a number of voices saying that what God is doing now and is about to do will be a "new thing," it is being birthed by the same fire which ignited Pentecost as well as the subsequent seasons of revival which followed behind it.

It is said that those who do not study and learn from history are doomed to repeat it. I would add that those who fail to study the past will be less able to comprehend what is possible for us today and in the future. God wants to show and do more among us than we can ask or imagine, but we must at least maintain a healthy and growing baseline so that we can expect the greatest level of the "More" that he would like to show and do.

I don't believe that anyone could accuse me of operating in a gift of intercession. I have always seemed to struggle through to try to generate a disciplined prayer life. However, sometimes praying for God to move among us can be as simple as coming into agreement with what he has put in front of us and made plain concerning his intentions. I believe that he has released and sparked something that should not be too hard for us to detect, and with which we can resonate. They say that animals can readily smell and detect a coming forest fire and act accordingly, even when the fire is small and undetectable by humans. Can you catch the scent of something beginning to burn? If so, follow that scent!

What God needs is for us to be ready and equipped for a full-fledged fire, not so that we can extinguish it but so that it might consume us up. Some of us have fears and insecurities, which on a personal level, have held us back. And while the fire comes to test us (something which might initially generate some fear and apprehension), it comes primarily to burn away those things which have hindered us. Unlike its natural counterpart, supernatural fire creates more opportunities than what it consumes.

So against nature, we must turn towards the coming fire so that we can be part of it. This is how all revivals of the past were encouraged and maintained. We cannot let this one fail to burn because we're sitting amidst damp wood, or have surrounded ourselves with a moat of stagnant water so as to bar the flames from coming. We must welcome them. It seems counter-intuitive but these flames bring life, not damage. Remember how the flames of fire rested on the disciples' heads at Pentecost? The fire did not come to destroy but to do its work in them, eventually spreading outwards to those around them. Let's let it do that same work in each of us.