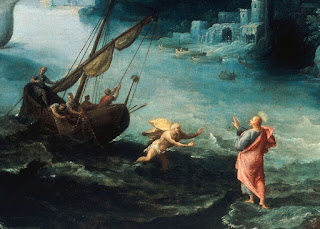 “Shortly before dawn Jesus went out to them, walking on the lake. When the disciples saw him walking on the lake, they were terrified. ‘It’s a ghost,’ they said, and cried out in fear. But Jesus immediately said to them: ‘Take courage! It is I. Don’t be afraid.’ ‘Lord, if it’s you,’ Peter replied, ‘tell me to come to you on the water.’ ‘Come,' he said. Then Peter got down out of the boat, walked on the water and came toward Jesus.” (Matthew 14:25-29 NIV)

If you’re like me, you might question Peter’s sanity. Many of us today are so fearful of being taken in by false, supernatural manifestations, that we would not have given Jesus the time of day, much less asked him to call us out on the water. Eleven other guys agreed with that assessment as witnessed by their inaction. While they stayed in the boat, Peter asked to walk on the water outside of the boat. Why?

Peter was convinced of a few things. He had witnessed Jesus’ authority over sickness and disease (Matthew 4:23). He also knew that Jesus had authority over the wind and the waves through their experiences on the Sea of Galilee (Matthew 8:23-27). Perhaps he wondered what more a follower of Jesus could accomplish. He had already been enabled to perform some of the same miracles that Jesus performed. More and more was becoming possible.

“Jesus called his twelve disciples to him and gave them authority to drive out impure spirits and to heal every disease and sickness… As you go, proclaim this message: ‘The kingdom of heaven has come near.’ Heal the sick, raise the dead, cleanse those who have leprosy, drive out demons. Freely you have received; freely give.” (Matthew 10:1,7 NIV)


Peter, a common (and sinful) fisherman (Luke 5:8) had been empowered to both proclaim and demonstrate God’s authority and power to heal. But this was altogether different. Jesus—if it actually was Jesus—had come walking towards him on the lake. When Jesus attempted to calm them down, Peter must have recognized the voice of the Great Shepherd (John 10:27), for he said:

What was he thinking? What if it were not really Jesus, but a ghost as they had first reasoned? Was Peter really willing to take that chance, knowing that if it were not Jesus, he would immediately sink to the bottom of the lake? Peter seems to have had a genuine method to his madness. Not only did he know from his own experience what faith could do, he learned a very important lesson from a certain Roman who was not so different from himself. This man had come to Jesus and said:

“‘…Just say the word, and my servant will be healed. For I myself am a man under authority, with soldiers under me. I tell this one, “Go,” and he goes; and that one, “Come,” and he comes. I say to my servant, “Do this,” and he does it.’ When Jesus heard this, he was amazed and said to those following him, ‘Truly I tell you, I have not found anyone in Israel with such great faith.’” (Matthew 8:8-10 NIV)


Perhaps Peter, who on the day he first met Jesus exclaimed, “Go away from me, Lord; I am a sinful man,” identified with the centurion’s disposition, and therefore, also identified with his faith. Both men understood the power of operating under authority. The centurion had been commissioned by the Roman army and was accustomed to his subordinates obeying his commands. Likewise, under Jesus’ command, Peter had been successfully commissioned to heal the sick. Yet, we have no record of Jesus’ commending Peter for his great faith.

At that moment, however, Jesus exalted this centurion’s faith over all those living in Israel, including Peter (Matthew 8:10). I don’t think Peter ever forgot this encounter and the lesson it held. So in faith (perhaps coupled with a little jealousy), he put what he learned to good use on the Sea of Galilee and asked Jesus to command him to come (Matthew 14:28). Jesus responded:

When someone with authority says, “Come,” they come. Right? That was the lesson, wasn’t it? Jesus had praised the centurion for understanding this truth about faith and now Peter took a step towards walking it out… literally, on the water! In Peter’s estimation, no one but Jesus was qualified to call him out onto the water and empower him to walk upon it. If Jesus was calling, then Peter could do it.

Peter gets a raw deal from those who don’t appreciate what he accomplished. At this point in his life, he was just a fisherman who simply applied what he learned by walking alongside Jesus. That's called discipleship. While his actions were dangerously bold, they were not flagrantly foolhardy. While most are more likely to error on the side of caution (as if Jesus will not be there to catch us if we get in over our heads), Peter volunteered to have his faith tested and he was not rebuked for anything, except for his doubt.

Jesus desires for us to ask him to call us to step forward where it appears there is no place to lay our feet, for he wants to take us further than we ever thought we could go. It is only those who attempt to walk on the water who ever will. The only reason anyone might ever have cause to walk on the water, and perhaps the only reason Peter wanted to, is because Jesus walked there first. Jesus said that we would do the works he did (John 14:12).

Peter had already demonstrated that this is so by following Jesus in healing the sick and casting out demons — acts that many Christians avoid today. He simply took this truth a step further. Like a good follower, he wanted to see just how far he could walk.

... For more of Jesus' walk on the water, see Holy Ghost Story

Posted by Chris Grahl at 8:01 PM No comments: