Is It Today Yet? 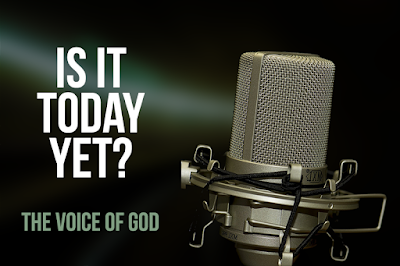 I was recently in a conversation where the idea that God still speaks today was in question. The person making the point believed that God only speaks today through his written word. That logic, however, creates quite a conundrum because the Bible, gives no indication that God would or has ever stopped speaking. Jesus Christ is, after all, the same yesterday, today, and forever (Hebrews 13:8). After his resurrection and ascension, he, along with his Father and the Spirit, are found speaking to believers in various ways up until the final pages of the New Testament.

It is today with which we should be most concerned, but before we go there, let’s first dismiss the idea that God could lose the will or the ability to speak, that he has had his larynx legally tied in a Knott, or that he has taken a vow of silence seeing that everything that he had wanted to say had finally been written down. I’m finding that reasoning very difficult to support, especially since God also indicates in his written word that even inanimate objects like rocks could cry out if necessary (Luke 19:40). In addition, we're told that the blood of Abel, though dead, is still able to speak (Hebrews 11:4). And if God does not speak today, how were any of us enabled to answer his call?

As I read them, the Scriptures indicate that God is a God of and for all seasons and dispensations, not a God of the past only. Furthermore, the written word, which I am told is the only means by which God speaks today, promises us that in these last days, Jesus is indeed speaking (Hebrews 1:1-2). Since the time that this passage was written, the only thing which has changed in the new, everlasting, and final covenant is that there have been more last days added to the tally. As long as we are his sheep, we should be hearing his voice (John 10:27). While yesterday is gone, eternity starts fresh each morning, becoming a day which the Holy Spirit calls, “Today.” And according to the author of Hebrews, as long as it is called, “Today,” we are called to encourage one another, keep our hearts soft and on target, and of course, hear God’s voice (Hebrews 3:7-15 NIV). Everyday is “Today,” yet, we’ve not yet excelled in keeping our hearts from getting hard and have a long way to go to perfect the art of encouragement. Is that merely because we’ve not responded well to his voice, or is it because we have come to deny that he is even speaking?

So while it is one thing to acknowledge that the Bible contains the very thoughts and expressions of God, we must not fall prey to the notion that God no longer speaks today. He has not imposed a gag order on himself, freezing himself in time while posting his instructions for life on the outside of the fridge. For all intents and purposes, many have put God in just such a box, unintentionally rendering his voice as the dead author of a living autobiography, instead of a very present voice which makes his word alive in us. God did not speak from the beginning of creation so that we might one day receive his thoughts in written form alone. Instead, he recorded all those things so that we might seek out and listen to his voice. Today, if you hear his voice, don’t let your hearts become hardened for as long as it is called, “Today,” his living voice still speaks…at least that’s what the Holy Spirit says.