Who Was Jesus and What Did He Come To Do? 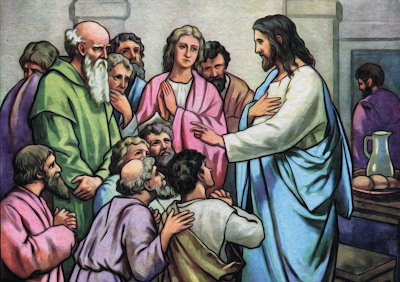 There are a number of popular titles and descriptions given to Jesus, which set out to define him. Have you ever wondered which is the most widely referenced and which is found in all four Gospels? Take a guess among your favorites.

LAMB OF GOD
We all know that Jesus is the Lamb of God. Most references of this phrase are from John and appear in his Gospel and in the Revelation.

PRINCE OF PEACE
He is famously known as the Prince of Peace from a singular reference made by Isaiah.

WONDERFUL COUNSELOR
Again, this is iconic, but remains one, single reference found in the book of Isaiah.

SON OF MAN
Perhaps one of the most referenced titles, it is found in Matthew, Mark, Luke, Ezekiel, and Hebrews.

SON OF DAVID
The phrase, Son of David is used a number of times in Scripture, but when referring directly to Jesus and not one of David’s actual sons, it is found in Matthew, Mark, and Luke  (the synoptic Gospels).

EMMANUAEL
Emmanuel (God with us) is a favorite title for Jesus. It is, however, only found once in Matthew, and twice in Isaiah.

SON OF GOD
This one could be the winner! The title, Son of God does appear in all four Gospels, Romans, 2 Corinthians, Hebrews, 1 John, and Ephesians. An argument could even be made that this reference could be combined with Son of Man, and Son of David to underscore the importance and preeminence of Jesus as the Son. I think that if nothing else, this title is the most foundational and serves as the basis upon which we can build our faith.

That being said, there is another description of Jesus which best defines what Jesus came to do. Yes, he came to bring salvation at the cross and resurrection, but for what goal? What did he want to have happen to and through us before the time when time comes to an end? So without further delay, below is what I would consider the least recognized, least understood, and perhaps the most definitive description of what Jesus came to do.

BAPTIZER IN THE HOLY SPIRIT
This title does not spring from the tongues of most Christians; neither is it the topic heralded by most theologians. Still, I contend that it is the most confirmed identity of Jesus and what he intended to accomplish found within the New Testament. Jesus is the Baptizer in the Holy Spirit. This iconic description holds the distinct honor of being found in all three synoptic Gospels (Matthew, Mark, and Luke), as well as being reaffirmed by John in his Gospel. Each reference expresses the following thought, “I baptized you with water, but it is he who will baptize you with the Holy Spirit” (Mark 1:8 ISV). Rarely do all four Gospels mesh to tell the same story or make the same point because John's Gospel was written to present a different focus than that of the synoptic evangelists. In addition to all four Gospels being in agreement on this point, we also find that the Book of Acts reiterates this same sentiment not once, but twice more (Matthew 3:11, Mark 1:8, Luke 3:16, John 1:32-34, Acts 1:5, Acts 11:16). This is unparalleled in the New Testament, and it holds the honor of being spoken first by John the Baptist (the last Old Testament prophet), by Jesus himself, and finally by Peter. That's a six-fold witness presented by three major New Testament figures.

I'm sure some would argue that Jesus clearly came to die on the cross and save mankind from sin. This is of course a true statement, but it is clearly not a complete one. He doesn't save us merely to get us to heaven. We know this because he told us to pray that his kingdom would come and his will would be done here on earth just as it is in heaven. He saved us for a purpose: that we might go into all the world with his message of the kingdom. He sent his Spirit to empower us to carry out that command. "...It is God who works in you to will and to act in order to fulfill his good purpose" (Philippians 2:13 NIV).

Baptisms
"Therefore, leaving behind the elementary teachings about the Messiah, let us continue to be carried along to maturity, not laying again a foundation of repentance from dead actions, faith toward God, instruction about baptisms, the laying on of hands, the resurrection of the dead, and eternal judgment..." (Hebrews 6:1-2 ISV). The writer of Hebrews says that the teaching about baptisms, plural, is a basic teaching of the Church. This reinforces the premise of multiple baptisms that were referenced in the Gospels. Specifically, one of those instances comes from John the Baptist, when he says, “I am baptizing you with water as evidence of repentance, but the one who is coming after me is stronger than I am, and I am not worthy to carry his sandals. It is he who will baptize you with the Holy Spirit and fire” (Mark 3:11 ISV). This passage clearly establishes two distinct types of baptism. This distinction continues in one form or another within the other five references as well. All six declare Jesus' ministry goal and are listed at the bottom of this presentation. If those six, nearly-identical references were not enough evidence, there are actually two more passages within the Book of Acts which reinforce the idea of two types of baptism as well as Jesus' role as Baptizer in the Holy Spirit. The first Scripture (Acts 13:24,25) falls just a few words short of being included in the first set of passages. The second Scripture (Acts 19:2-7) actually demonstrates through Paul's ministry, the very point Jesus, along with his cousin, John expressed in the Gospels and the beginning of Acts. Both Scripture passages are included below along with the first six references.

A Major Distraction
An unneeded distraction was introduced to the Church concerning the baptism in the Holy Spirit during the Pentecostal movement of the early 1900s. This erroneous teaching was then perpetuated by subsequent denominations birthed out of those events. When, after an absence of roughly 1,500 years, spiritual outpourings began to return to the church in great measure, some believed and propagated the idea that speaking in tongues was the single evidence to substantiate an infilling of the Holy Spirit. Although Scripture certainly supports the idea that speaking in tongues can be AN evidence of the Holy Spirit, this doctrine unnecessarily narrowed the entrance for those wishing a closer relationship with the Lord as well as their desire to receive power to carry out their calling. Despite this roadblock, God has provided us with much evidence to the contrary, including the testimony of two stalwarts of the faith.

Two Great Examples
Two well-known evangelists who never spoke in tongues have left us witness of their personal experience with the Holy Spirit. Few doubt that these men had an impact on the world through their ministries. Charles Finney (https://www.hopefaithprayer.com/baptism-holy-ghost-charles-finney) and D.L. Moody (http://holyspiritempowers.com/2013/02/d-l-moody/) each give very detailed and personal descriptions of how they were filled with the Holy Spirit - another term for the baptism of the Holy Spirit. Through the enablement they received, they accomplished great things for God, yet neither of them spoke in tongues. No one can deny that these men and countless others fulfilled the instructions Jesus gave when he said, “…Wait for the gift my Father promised, which you have heard me speak about. For John baptized with water, but in a few days you will be baptized with the Holy Spirit… you will receive power when the Holy Spirit comes on you; and you will be my witnesses in Jerusalem, and in all Judea and Samaria, and to the ends of the earth” (Acts 1:4,5,8 NIV).

We need this power, the same power that raised Jesus (and us) from the dead so that we can become those witnesses. It is not enough to be raised; we must live, enabled to raise others. Who doesn’t want Jesus to make them able to accomplish that which they’ve been called to do? But enough about the explanation. Here are the eight passages mentioned above. One would be hard-pressed to see these as anything less than a compelling argument that Jesus was called to a specific task: baptizing us in the Holy Spirit so that we can be enabled to fulfill the tasks before us. And, these passages are a mere hint of what the Lord has made available to all of his children. (Acts 2:39) Jesus said, “Which of you fathers, if your son asks for a fish, will give him a snake instead? Or if he asks for an egg, will give him a scorpion? If you then, though you are evil, know how to give good gifts to your children, how much more will your Father in heaven give the Holy Spirit to those who ask him!” (Luke 11:11-13 NIV).

Jesus, Baptizer in the Holy Spirit

Matthew 3:11 (ISV)
“I am baptizing you with water as evidence of repentance, but the one who is coming after me is stronger than I am, and I am not worthy to carry his sandals. It is he who will baptize you with the Holy Spirit and fire.”

Mark 1:8 (ISV)
“I baptized you with water, but it is he who will baptize you with the Holy Spirit.”

Luke 3:16 (ISV)
“I'm baptizing you with water, but one is coming who is more powerful than I, and I'm not worthy to untie his sandal straps. It is he who will baptize you with the Holy Spirit and fire.”

John 1:32-34 (ISV)
“I didn’t recognize him, but I came baptizing with water so that he might be revealed to Israel.” John also testified, “I saw the Spirit coming down from heaven like a dove, and it remained on him. I didn’t recognize him, but the one who sent me to baptize with water told me, ‘The person on whom you see the Spirit descending and remaining is the one who baptizes with the Holy Spirit.’ I have seen this and have testified that this is the Son of God.”

Acts 11:16 (ISV)
“Then I remembered what the Lord had said: 'John baptized with water, but you will be baptized with the Holy Spirit.’"

Acts 13:24,25 (ISV)
“Before Jesus’ appearance, John had already preached a baptism of repentance to all the people in Israel. When John was finishing his work, he said, ‘Who do you think I am? I’m not the Messiah. No, but he is coming after me, and I’m not worthy to untie the sandals on his feet.’”

[Note: Here in Acts, Luke is alluding to his own report of John's words as recorded in Luke 3:16. Therefore, one could easily finish his reference above with, "It is he who will baptize you with the Holy Spirit and fire."]


“Did you receive the Holy Spirit when you believed?” They answered him, “No, we haven’t even heard that there is a Holy Spirit.” He then asked, “Then into what were you baptized?” They answered, “Into John’s baptism.” Then Paul said, “John baptized when they repented, telling the people to believe in the one who was to come after him, that is, in Jesus.” On hearing this, they were baptized in the name of the Lord Jesus. When Paul laid his hands on them, the Holy Spirit came on them, and they began to speak in foreign languages and to prophesy.
Posted by Chris Grahl at 5:57 PM No comments: