Arrival - The Conversation of Heaven (“I don’t talk like that!”) 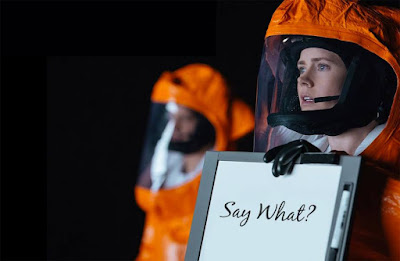 The Science of New Language

The movie Arrival is a science-fiction drama which explores the challenge of communicating with an alien species. One scene expands upon the theory that our brains get rewired when we learn a new language. This is not wholly science-fiction. It is actually true that our brains grow when we learn a new language. In addition, studies at Georgetown University suggest that the brain patterns of those immersed in learning a new language begin to mimic the brain patterns of native speakers of that language.

As presented in the movie, it is easy to be overwhelmed by learning to communicate in and with a culture where we find no points of reference. This is also true with the language of heaven. As God’s thoughts are high above ours, so is the way of his Spirit. There is a great divide between human intellect and reasoning, and the speech and thought of the heavenly culture. Although we may be his people, we may lack experiential knowledge of his Kingdom. Our hearts, minds, and actions must be in step with what’s going on in heavenly places, where Paul tells us we are already seated.

Isaiah was confronted with this kind of culture shock and experienced a heavenly language barrier. This happened in the year that King Uzziah died when Isaiah…

I recently came across a sermon with a very interesting take on Isaiah’s vision which adds some context to Isaiah's experience as he witnessed the interaction between the heavenly hosts. The speaker found that…

“…they’re having this conversation and they’re consumed by the theme of his glorious majesty and they’re consumed by his glorious plan to fill the earth with who he is and Isaiah says, ‘Wow!, I don’t talk like that.’ And he says, ‘and I’m surrounded by people who don’t talk like that.’ That’s what he means by being a man of unclean lips. He goes, ‘my preaching and my conversations and my blog posts, my tweeting, and my instagrammings … - it’s not connecting my audience to what is happening around the throne.” ~ Stewart Greaves

The angels are not talking to God, nor are they in discord. They’re talking back and forth to each other about the glory of God, and Isaiah finds himself woefully out of step with their culture, thinking, and language. How was Isaiah to reconcile his position with that of this new world? He needed a rewiring… a transformation afforded to him by the fire of the altar so that he might take on the language and mission of heaven.

“… one of the seraphim flew to me with a live coal in his hand, which he had taken with tongs from the altar. With it he touched my mouth and said, “See, this has touched your lips; your guilt is taken away and your sin atoned for.” Then I heard the voice of the Lord saying, “Whom shall I send? And who will go for us?” And I said, “Here am I. Send me!” (Isaiah 6:6 NIV)

“…transformed by the renewing of your mind, so that you may discern what is the good, pleasing, and perfect will of God.” (Romans 12:2 HCSB)

We need the ongoing transformation of the Spirit so that we can think, speak, and act according to the culture of heaven, right here on earth. Concerning the effect of learning earthly languages upon the human brain, scientists call this kind of transformation, linguistic relativity.

“Learning a new language doesn't just change the physical makeup of the brain. Based on a theory known as linguistic relativity, learning a new language can also change the way we see the world. This is specifically true in relation to our color perception. For example, Japanese speakers have far more words to describe the color blue, and as a result are generally able to see more shades of blue than English speakers. On the other side of the spectrum, the Himba tribe of Namibia in Southern Africa have only five words to describe all the colors in the world. Researchers have observed that, without a word for the color blue, the Himba struggle to tell it apart from green — an easy feat for English speakers.” ~  Dana Dovey: https://www.medicaldaily.com/pulse/how-learning-new-language-changes-your-brain-and-your-perception-362872

Even as believers, we can be separated from or have problems finding context with certain facets of the life of God. This fact should not surprise us. We see through a glass darkly, with his wonders before us to be revealed as we are changed from glory to glory. So, although God is ever present, we may need an Isaiah, or Jacob experience before we discover that “Surely the LORD is in this place, and I was not aware of it.” (Gen 26:18 NIV) Then, our eyes can be opened to things we formerly had no ability to perceive or describe.

Burning Righteousness Upon Our Lips

As believers, we should hunger and thirst to enter into, and be filled with his heavenly culture, He promises that if we draw near to him, he will draw near to us (James 4:8) There are multiple promises found in Scripture, that we may rely upon as we seek to enter in.

“Ask and it will be given to you; seek and you will find; knock and the door will be opened to you.” (Matthew 7:7 NIV)

“'I will give them a heart to know Me, for I am the LORD; and they will be My people, and I will be their God, for they will return to Me with their whole heart.” (Jeremiah 24:7 NIV)

The Implanted Word Can Save You

In the movie Firefox, Clint Eastwood plays Mitchell Gant, a pilot who has commandeered a new, experimental Russian jet which operates via the pilot's mental commands. The catch? It only responds to the thought patterns of those who think in Russian which is not Gant’s 1st language. While being pursued, he panics. His thought-language has slipped back into English and he’s unable to command the jet. He has to remind himself that in this realm, there is only one way to think, and that there's only one language that will work for him, and that’s Russian. Changing the way we think is a simple definition for the word repentance. We must rely on the implanted word to save us (James 1:21), by humbly putting our own words and former way of speech behind us and relying upon the language of the kingdom..

“You were taught, with regard to your former way of life, to put off your old self, which is being corrupted by its deceitful desires; to be made new in the attitude of your minds; and to put on the new self, created to be like God in true righteousness and holiness.” (Ephesians 4:17-24)

On Earth As It Is In Heaven

As we are transformed and enabled to see and experience the language and culture of heaven, we will, like the Seraphim, enter into the heavenly conversation.

“…be filled with the Spirit, speaking to one another with psalms, hymns, and songs from the Spirit. Sing and make music from your heart to the Lord, always giving thanks to God the Father for everything, in the name of our Lord Jesus Christ.” (Ephesians 5:18-20 NIV)

“What then shall we say, brothers? When you come together, everyone has a psalm or a teaching, a revelation, a tongue, or an interpretation. All of these must be done to build up the church.” (I Corinthians 14:26 NIV)

These are not prescriptions which bring holiness, these are practices which spring from a culture of holiness nurtured within us. What they bring is a manifestation of the Glory of God. They are the results of a changed, expanded, and thriving heavenly culture in which corporately, we’ve been rewired to experience and proclaim the kingdom on earth as it is in heaven.
“What we have received is not the spirit of the world, but the Spirit who is from God, so that we may understand what God has freely given us. This is what we speak, not in words taught us by human wisdom but in words taught by the Spirit, explaining spiritual realities with Spirit-taught words.” (1 Corinthians 9-13 NIV)

These passages refer to our language, our speech, our conversation and way of living as they become what Isaiah experienced. As we accept and walk in the forgiveness bought for us, we must strive to enter into his rest as well as the culture and conversation of the Kingdom of God - on earth, as it is in heaven. In some ways, it may seem like an alien visitation, and in some ways it is. We are to be aliens and strangers here, speaking what to the world seems like an alien language. It should, however, not be alien to us.
Posted by Chris Grahl at 2:12 PM No comments: