When the Disciples Became Christians 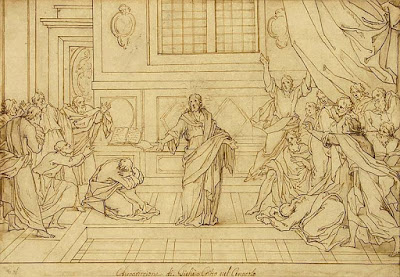 Of the four Gospel writers, John is the only one who directly chronicled the conversion of the apostles:

“…Jesus said, ‘Peace be with you! As the Father has sent me, I am sending you.’ And with that he breathed on them and said, ‘Receive the Holy Spirit. If you forgive anyone’s sins, their sins are forgiven; if you do not forgive them, they are not forgiven.’” (John 20:21, 22 NIV)


This happened on the day of Jesus' resurrection, the day when the disciples were born again. Up until this time, they were not yet born of the water and the Spirit. Although they had put their faith in Jesus back in John 2:11, their faith was still waiting for the New Covenant to be enacted — paid for by his blood, and proven by the resurrection.

“…God presented Christ as a sacrifice of atonement, through the shedding of his blood—to be received by faith.” (Romans 3:25 NIV)


Jesus had to accomplish and fulfill his ministry before anyone could be enabled to take full advantage of what he finished on the cross. Despite the fact that they had walked with Jesus for three years, had been chosen to be his apostles, and had performed signs in his name, they were not yet even least in the Kingdom of Heaven (Matthew 5:19). Until the resurrection, they were held under the Old Covenant.


Have We Been Ripped Off?

Now that Jesus had fulfilled everything on the cross and had conquered death, the disciples were finally enabled to fully enter into the salvation bought for them. Yet for some reason, the four evangelists limited the account of the apostle's personal salvation experience to a two-line mention in John’s Gospel. That’s it!

In addition, their report to Thomas upon his return (he had been absent from this event), consists of one, four-word testimony, “We have seen the Lord!” (John 20:25 NIV)

What? Is that all? Why is John the only writer to report concerning the disciples new birth event and why so short? Why only four words to Thomas? Did these details get erased over the centuries, or did God have something else in mind?

Interestingly, their salvation report is not alone in its brevity. Luke's account of their filling by the Holy Spirit (Acts 2:1-4) which took place a few weeks later, is also uncharacteristically short. With over 120 present, the Holy Spirit fell upon all the believers in the room. They saw tongues of fire and spoke in other languages.

This synopsis is nearly as long as Luke's actual account, which consists of four sentences constructed from 62 words. More verbose and more dynamic if compared to, "Receive the Holy Spirit, and “We have seen the Lord,” yet a little lackluster considering this is what Jesus referred to as, "The promise of the Father."

One might question why the two most vital New Covenant experiences (the new birth and baptism in the Holy spirit) are given so little coverage in the lives of the disciples. It’s almost as if one must really apply themselves and seek out the true value and significance of these events for themselves or else their significance might easily be lost. Unless of course, this was the point all along.


What Does it Take to Believe?

There are a precious few references which clearly define the new birth, and how to obtain it. Jesus’ discourse with Nicodemus—specifically John 3:3, 3:7, 3:16, and passages like 1 Peter 1:22, 23 constitute the bulk of them. But, sometimes, less is more.

I believe that it's easy to disregard or perhaps even devalue something if is provided without any effort on our part. But, if we are hungry enough to dig and eventually uncover the truth—much like finding a treasure hidden in a field, we hold it in higher esteem.


When the Church Received the Spirit

Perhaps this level of ambiguity explains another phenomenon in the Church—why many of the manifestations of the Holy Spirit experienced today are not clearly detailed in Scripture. Although Paul lays out a large list of spiritual gifts in 1 Corinthians, Acts does not spell out and define each spiritual manifestation. The record of the Day of Pentecost is an excellent example of this.

The outpouring of the Spirit on that day had very much to do with the gift of tongues, yet Peter, who claimed he would explain everything to those who had asked, never once mentioned this gift.


“‘… We hear them declaring the wonders of God in our own tongues!”… and… they asked one another, “What does this mean?”

“… Let me explain this to you; listen carefully to what I say… this is what was spoken by the prophet Joel: ‘In the last days, God says, I will pour out my Spirit on all people. Your sons and daughters will prophesy, your young men will see visions, your old men will dream dreams. Even on my servants, both men and women, I will pour out my Spirit in those days, and they will prophesy…'” (Acts 2:11,12-14-18 NIV)

Despite Peter's omission, his explanation seemed to be sufficient to win over this crowd of 3,000 and despite the fact that Scripture isn't particularly explicit as to how to receive the Baptism in the Holy Spirit, over 500 million people today identify with that experience.

We in the Western world are a literal crowd. We want everything spelled out for us in a how-to list, however, Scripture rarely obliges us. Yet despite these shortcomings, God still moves successfully into the lives of all who will believe. Again, maybe that was his plan all along.

The Gospels emphasizes living out our lives by demonstrating the Kingdom and confirming those things written in Scripture. It's all there, it's just not always there they way we might desire it to be.

“… the word of God in its fullness— the mystery that has been kept hidden for ages and generations, but is now disclosed to the Lord’s people… the glorious riches of this mystery, which is Christ in you, the hope of glory.” (Colossians 1:25-27 NIV)

Posted by Chris Grahl at 9:20 PM No comments: